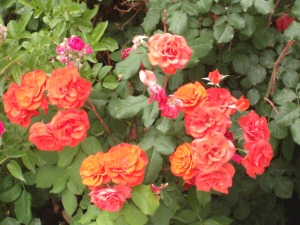 There is something abundantly satisfying to the pace of life in Ladakh.  I did my laundry by hand, again, and it feels so good to be physically involved in my well-being.  The day after the Dalai Lama’s birthday was a tidying up day – needed to get some things taken care of.  Wrote postcards, spent some leisure time reading, ate a huge breakfast, filled my water bottles at the purified water station and then went to the post office.  One note – you must assert yourself at times in Ladakh, which of course makes sense, I was still in India.  There was a line in the post office.. however.. half the people who entered paid no attention to it!  Therefore I eventually saw this pattern, held my own and got to the front for stamps, which cost, wait for it!…..   Eight rupees.  Hold on a second!  For less than 20 cents U.S., I can send a postcard from Ladakh to anywhere in the United States?  Wow!!  If you count all the stops, I bet it travels 12 – 15K miles…  Of course, sometimes things get lost in the mail, or delayed for a few months – only to arrive way after you do…  But for eight rupees I could scarcely believe my luck.  However, in glancing through my journal, this was actually a surprisingly full day, so onward!

I met with Tamding and then his brother, who showed me their apartment.  Oof!  In Tibetan, Tamding described it as being large and adequate.  Well I would say it was more on the adequate side.  It had a dirt floor, cement walls and wooden rafters, with a single “window” and door.  The lock was on a hook on the door (no doorknob).  They shared a large communal bathroom which I was a bit scared to enter (to be frank).  In the apartment, they (Tamding, his wife Drolkar and his brother Chopha) had put down mats, put up a thangka and other decorations so I found it quite pleasant.  Note, I would definitely be more of a social butterfly if I lived there.  🙂

Anyway, I gave Chopha a Craniosacral session.  It was good for me to share my skills.  Although it was a little exhausting (remember my anxiety and adrenals were running loop-de-loops) and I did not speak to him about an exchange, so I felt a little disappointed.  But overall glad to be gifting some bodywork in Ladakh.

Then he and I went to his table in a Tibetan market and he showed me his CD’s for sale.  I listened to about a dozen of them before deciding on a few.  In the process, several foreigners came by.  Two of them stood out – two Israeli women tried to strike a bargain, but neither side would budge so they did not purchase any CDs.  I mean hey – with me standing right there, not bothering to talk them down, why should they acquiesce to the bargain hunters?  Or maybe I should learn to ask for the bare minimum in the future and see what happens.

Visited Namgyal again (not sure why), where I met a Canadian woman who looked really familiar.  Went through the rigamarole for exchanging money – beware and bring your money from Delhi!  They charged a five percent commission.  Finally I rounded out my day by visiting the Amchi, the Tibetan doctor, again.

She repeated several pieces of advice from the previous visit, however, she also mentioned some new advice.  What blew me away is that she had not touched my wrist for three seconds when she stated, matter of factly, “no more apple juice.  Don’t drink anymore!”  Wow that was quick and it must be so obvious in my pulses.  The same thing happened previously to another pilgrim – she yelled at him for drinking apple juice. This time she told me, to remedy my extreme Loong (Tibetan word for WIND) and Lung (the English word for the organ which manages respiration) disorders, I needed to avoid the following: roasted food, salty food, spicy food, apple juice, heavy exertion like running, cold water (I should drink warm water), anything which requires me to breathe hard, dessert type foods (ah no more sweets), caffeine and finally she recommended I keep my chest warm – no going out unprepared.