As I mentioned in my previous post, we spent several days at Lama Yuru Gompa.  This is the largest Drikung Kagyu monastery in Ladakh, and I believe I heard someone mention that there were about 400 monks and 80 nuns at the monastery while we were there, to watch and participate in the Cham Dances and Ceremonies.  Some of these monks and nuns have more experience and realization under their belts, and that is what this post is about.

Here is a list of who we attended while at the monastery, and a little about what they said or what teachings / transmissions they gave us.

Drupon Sonam Jorphel Rinpoche – or “Lama Jorphel” as he likes to be called, is one of the most productive lamas I think I have yet to come across.  Lama Jorphel is the present retreat master for Lama Yuru Monastery.  In fact, when His Holiness the Gyalwa Drikungpa Chetsang Rinpoche was doing his three year retreat there, the previous retreat master who was highly venerated and respected, Kyunga Rinpoche, passed away (dissolved back into the mandala).  At this point, Drupon Jorphel, his successor, took over the retreat duties.

Lama Jorphel is getting older now, so I don’t think he travels quite like he used to, but our tour guide met him in Malaysia and said that he used to teach extensively outside of Ladakh.  Lama Jorphel also is primarily responsible for much of Lama Yuru’s renaissance – much of the present-day monastery had to be rebuilt or created new.  There is now a “hotel” which has many modern facilities which over looks the main courtyard of Lama Yuru.  This allows tourists and pilgrims to stay in comfortable lodging while observing the Cham Dances.

Lama Jorphel is also responsible for much of the building of retreat facilities around Lama Yuru.  There is even a building to house one or two Western retreatants – due to the harsh winters in Ladakh (or Srinagar to be more precise) – the Westerners generally come for one, two or three of the warmer months do their retreats.  When we met Lama Jorphel, it was at the top of the monastery complex, where most of the retreat huts are located, and he spoke to us about the monastery and about Tibetan Buddhism.

He also talked about impermanence and how, in general, Westerners do not put enough t 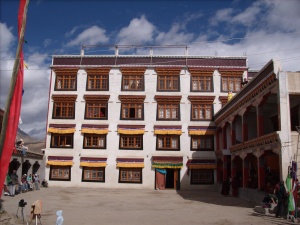 hought into death and the resultant need to practice Dharma.  He talked a little about the importance of finding an authentic spiritual teacher, and once you choose, stick with that person to develop Tamzig – devotion and commitment.  He said that it is better to practice refuge and get the basics out of the way before jumping from one empowerment to the next, which is the tendency of many Westerners.

Rinpoche mentioned that technology had done so much to change Ladakh – he said it was only in the past couple decades that many cars, planes and buses had arrived.  He told a story about when he was young – he said he walked from Lama Yuru (in Srinagar) to Leh Ladakh – a journey of 400 km, then he took a bus to Dharamsala, then a plane to Delhi, then he took a bus to Sikkim and finally, he had to walk from Sikkim to Lhasa (Tibet) in the winter snows…  Whoa!  He said that first it was telegrams, then lights and electricity, radio and finally email.  He mentioned that when the first plane landed in Ladakh it was prostrated to – a seeming miracle!!

In my opinion, he seemed like a very valid, humble and potent monk.  I think his accomplishments and Dharma activities speak volumes for his dedication and realization.  Along the lines of Tibetan Lamas being named appropriately – apparently Jhorphel comes from “Jhor wa” which means material resources and “phel” means to increase – under Lama Jorphel’s watch, Lama Yuru monastery has grown significantly in buildings and in financial resources. 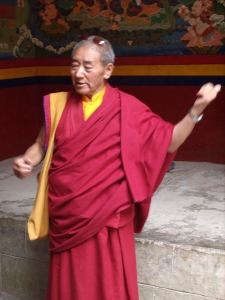 Bakula Rangdrol Nyima Rinpoche – a young Tulku, or recognized, reincarnate lama, is the 4th incarnation in this line.  One of our Ladakhi guides mentioned that when he is alive and associated with the monastery, it flourishes.  He is known as one of the best Cham dancers in the Drikung Kagyu, and sure enough, he had the main dancing responsibility in the Black Hat Dance (see future post).

Rinpoche gave us refuge, as several members of the pilgrimage had not taken refuge and desired to do so.  His english was pretty good, so he did not use a translator.  He spoke about what is required when we take refuge – 1) not causing further harm to anyone, 2) not worshiping or paying homage to non-enlightened deities / local spirits, 3) treating fellow Sangha members with kindness – as brothers and sisters.  This is in addition to taking one of the five precept vows.  See the history of Lama Yuru post (future post) for more on Bakula Rangdrol Nyima Rinpoche.

Drupon Sonam Kunga – as I mentioned in a previous post, Drupon is Bakula Rangdrol Nyima Rinpoche’s tutor.  So we first met him in Leh, at Rinpoche’s house.  At Lama Yuru however, he gave us a little tour of the main meditation and teaching hall.  He spoke a bit about work around the monastery and all the new construction that had occurred over the past twenty years (quite a bit).  He added to the history of the monastery which Togden Rinpoche had started.  Drupon was also a member of the 3-year retreat which included His Holiness Chetsang Rinpoche, Khenchen Rinpoche – Konchog Gyaltsen, Drupon Samten, and seven other highly respected teachers.

I will post a piece about Togden Rinpoche separately at this is getting long.  We were very blessed to have access to these sublime masters, to receive brief teachings and to learn about the fascinating history of Lama Yuru.  You can visit http://www.drikung-kagyu.org and click on the eminent teachers link to see more about these amazing lamas.