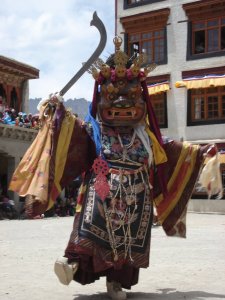 6/30/08 – We were planning to be at Lama Yuru for a few days at least.  And actually, I considered asking (Drupon) Lama Jorphel if I could do a week long retreat as I had an extra week on my itinerary.  However, later I opted out of that. [Updated in 2021: I really should have gone through with this retreat idea. Lama Yuru is where His Holiness the Drikung Kyabgon did his 3 year retreat, where Kyunga Rinpoche started as his retreat master (see previous posts about a story there). Then Drupon Jorphel – the same one we attended – took over as retreat master when Kyunga Rinpoche passed into parinirvana. As far as Drikung Kagyu lamas go, that retreat back in the early 80’s was star-studded. The accumulated merit and spiritual momentum you might say, is potent at Lama Yuru! Hence I regret not doing even a 5-day retreat there!]

My legs ached from yesterday’s mountaineering (and / or subsequent panic attack).  Today we are planning to watch the Cham dances, which are taking place today and tomorrow.  Early this morning, there was the option of going up to the monastery at 5:30 am to witness the Mahakala puja which requests obstacles to be removed from the Cham ceremonies.  They say that the Drikung-pas are good at calling rain (causing rain) and whether or not it was the Mahakala ceremony or the fact that we were at a Drikung Kagyu monastery or just a natural weather phenomena, it rained significantly for the first time we were in Ladakh.  Actually, that was the only time it rained with any accumulation for the entire month that I was there.

The Cham dances are very subtle.  It is the one occasion where the monks get to dance (they normally have vows against dancing).  In this case, it is a ritual practice of embodiment and offering.  Apparently the monks do some extensive visualizations – picturing themselves as the deities they are representing as they twist, hop, and spin around.  They are dressed up in elaborate costumes – and usually we were not able to tell any individual monks apart as they are wearing heavy gowns and hats or crowns or antlers (depending on the dance).  They also carry appropriate implements according to the deity they are representing (vajra, or scepter, or skull cup, etc).  Someone mentioned that each of their movements has symbolic meaning. 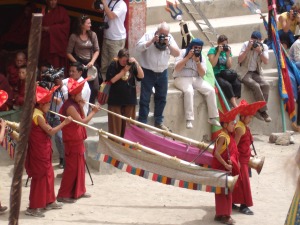 We sat or stood a lot, and I noticed my mind becoming very agitated – I wanted more action.  I wanted to be doing something.  It really was an effort to change my mind from experiencing angst to patience to be able to sit around for several hours and observe the dancers.  They would dance all day today and tomorrow, so I needed to calm down somehow.  In addition to the dancers, there were two “joker” characters – monks who were dressed up as old men with silly masks on.  It was their job to go around and pester people into making donations.  Lucky for us, after four or five times of coming through and asking for offerings, our trip guide told them to leave us alone (we would give a significant donation later on – no need to be bothered by the jokers).

There were many people at the monastery – Westerners including us Americans, Europeans, Japanese, Tibetans, a few Indians and many local Ladakhis.  Apparently the Cham dances draw large crowds – such that the major monasteries in Ladakh stagger their events so that they do not compete with each other.  Also, the Cham dances used to be in the 12th Tibetan lunar month, which would be closer to early February – or in the 1st month to celebrate the New Year – still in the winter.  However, observing the Cham dances is a method to obtain enlightenment (and the monks get to benefit others therefore by dancing), the dances are pretty much held in the summer in Ladakh where more people can benefit from watching.  And as a large tourist draw, the monasteries profit more as well.

Just to clarify about that last paragraph I am including this section, however due to my inferior intelligence, please pardon any mistakes I am making.  There are many methods or ways to obtain enlightenment – by eating or by taste (eating tsok-blessed food or mani pills), by sight – observing Cham dances or seeing a serene, peaceful yogi; by reciting words – saying prayers or mantras; by actions – doing prostrations or circumambulating stupas, etc.  Not to mention meditation and working on the union of Shinay (Calm Abiding) and Vipashana (Critical Insight). And I am certain there are many other skillful means to work toward enlightenment that I am leaving out.

There were about a dozen dances each day.  Some dances involved monks dressed up as animals – deer, or sometimes dressed as protector deities – it was fun to try to identify each one – Achi Chokyi Drolma was pretty easy to discern.  Bakula Rangdrol Nyima Rinpoche is known as a profound Cham dancer, and as such, we were anticipating seeing him in action.  Also, because he is a tulku (a recognized, reincarnated teacher), we could be pretty certain that his visualizations were clear and accurate.  More on this in a future post.  Each dance would last at least 15 minutes, with a few minutes of intermission between dances, or sometimes the monks would come out with all their instruments – drums, horns – short and long, symbols, etc – and parade around the courtyard.  This seemed to me to be an introduction to the next dance.