I originally wrote that going to Ladakh was going to a new world, which is true, but going to the Nubra Valley was yet another new world.  It was just as dry as the world we left behind, but it had towering sand dunes, striated canyons, (similar) treacherous roads and in one of its villages, a slightly Persian feel to the people.  There is greenery next to the river and the rivulets, sharp steep pinnacles and rocks are everywhere.

I wrote in my journal: “it looks like Utah plus Egypt plus Afganistan with the Moon and Mars thrown in for good measure. Bily Brown on the banjo, making the strings of my heart twang, brushing my teeth with willow, watching shooting stars and having a good laugh with members of the pilgrimage.”  There are an abundance of apricot trees (one of the only fruits to enjoys growing at altitude – hence the sugary staple of Ladakh – juices, jam, dried fruit and seeds all come from this hardy tree). 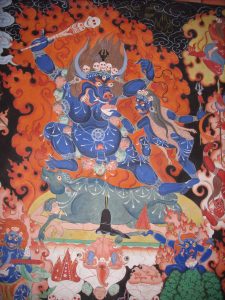 6/24/08 – another full day.  We visited Sartok (sp?) monastery, crossing the river to do so.  There are many statues and paintings, plus some black backgrounds with gold painted on it – making for a difficult-to-discern-yet-eerily-beautiful murals.  As we were leaving, we passed a monk carrying a boy on his shoulders.  The boy had on gold and saffron colored clothes, and some people were wondering if the child were special in some way – normally monks aren’t walking around with small children like that.

We stopped and sure enough, it was Bakula Rinpoche – the famous monk (tulku) whose previous incarnation was India’s ambassador to Mongolia.  He is a Gelugpa Tulku and he was just four years old when we saw him.  He was precious – he was playing with a toy, while many villagers and ourselves requested blessings of him.  The monk – I’m assuming his tutor – would say, “khata, khata” and point to us as we were waiting for his blessing.  He would pause his playing with the toy and put the khata around our necks and then go back to the toy.  There was something piercing and radiant about his eyes though – part child, part meditation master?  What a precious opportunity.

We came back for lunch, to the camp site.  A couple days earlier, I had put in a request for meat, because I normally have several servings of meat per week and we had been on a completely vegetarian diet up to that point.  However, they took the request quite literally and began to offer us meat with every meal…  Whoa!  Luckily I was not the only one who needed it. 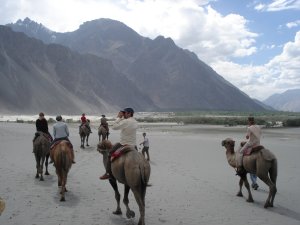 Later in the day, we rode Bactrian (sp?) camels – two humps.  There seemed to be a group of men who took care of the camels, and a group of Asian tourists got off and a couple minutes later, we got on.  Of course I was given the camel which seemed to be the most ornery.  Luckily it didn’t spit on me.  Although it required a guide all to itself as it kept trying to carry me off in another direction.

Some of the group went off to see a local deity shrine.  Apparently it was a bit of a hike, and I was tired from the day, so myself and a few others stayed behind.  In retrospect, considering how precious and rare the opportunity was to be in this marvelous and new country, I would have rather attended every event possible.  As it was though, I only missed a couple things.

As I mentioned in an earlier post, the Ladakhis are incredibly efficient with their water usage.  Their systems of irrigation are precise and “turned on and off” at various times during the day.  I say this because this particular canal near our campsite was full of water in the mornings but always running dry by early afternoon and evening.