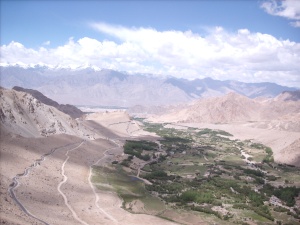 6/23/08 – Yesterday was a good day.  We saw incredible monasteries, a veritable Buddist city on a hill and we crashed a Ladakhi wedding where everyone was incredibly generous and welcomed us with warmth and authenticity.  Well guess what I discovered on this day, which might live in infamy in my viscera…  My fear of heights translates to many different situations – Yay!  Or I should say, Ouch.  Here’s why:  The roads in Northern India are not any better than the poorest roads in the United States (from my limited travels).  I guess we should be grateful that they have roads at those high altitudes in India at all, but…  I’m not sure I need to be on them!  Maybe if I practice more Dharma I will let go of my attachment to self and this little phobia will go away upon doing so.

We were heading to the Nubra Valley.  There are several monasteries in this valley, along with views of a canyon which rival that of the Grand Canyon in Arizona, USA, and there were several little surprising attractions as well. 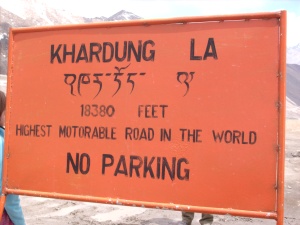 On this day, we primarily traveled by car, up and across the highest motor-able road in the world.  Seriously – 18000 plus feet.  The problem, if I may go so far to call it that, was that to get to the Kardung la Pass, most of the road hugged the sides of precariously steep, cliff-like mountains, some of which seemed to be supported by shoddy masonry (only).  As we went up higher and higher, we would see, far down the slopes, skeletons of Jeeps and LandRovers and buses that had fallen off the road, most likely with tragic consequences.  And as if that were not enough, there were a couple places where rock slides had taken the road out and they were in the process of patching it back together.

Oh, and I need to mention that we were heading into areas that border Pakistan (or China), and therefore we had to have our passports with us in case we came to a military check point, which was not uncommon.  That also meant we had to be careful what we photographed (basically no cameras around military installations).  Not to cast a somber mood, because it seemed like these rules had been relaxed, but all of this was in my mind as we climbed to the highest point in our pilgrimage. 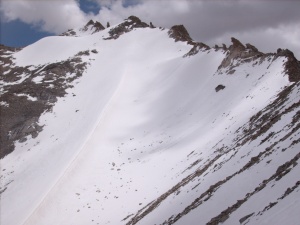 Just to give readers a little glimpse of what I found frightening: nearly all the corners around the mountain roads are blind.  There are no lines on the road, no median and no extra space in the shoulder.  Also, on at least half of the curves, there were no guard rails.  So a slight mistake on the driver’s part or by the on-coming driver, and well, it would be time to practice Phowa (and hope our preparations for our next rebirth had bee in good order).  Therefore, the drivers constantly honked as they approached each curve (thank goodness!) and as a result, I was constantly reminded of my fear of heights…  But there was a silver lining and a beautiful valley to see on the other side.  With that…

In my journal, I mention that there were large, colorful cargo trucks 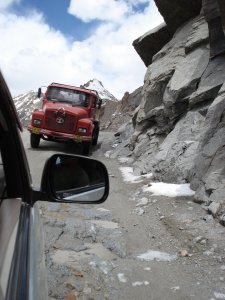 on this road, along with other buses and vans full of people and supplies.  From about 16000 ft and up, the pavement stopped and more of a patchwork of cobblestones could be observed in the road.  This was true on both sides of the pass.  All in all, the journey to the Nubra valley took six hours (from Leh).

On top of Kardung la Pass, the air was thin, clean and crisp.  Considering we had gone from Leh at 11000 ft to 18 K plus at the top, we needed jackets and there were little stubborn patches of snow around.  Oh – a side note.  Thankfully we did smoke pujas – otherwise known as offering rituals of protection on most days of the pilgrimage.  And on this particular day, I was enormously glad we had done these rituals and that we continued doing them.  We did smoke offerings at the top of the mountain as well, at least most of us did.  Some people (those of us with spry youthful bodies) decided that 18,300 ft was not high enough and that they should continue climbing a rocky ridge up toward some boulders (see photo). 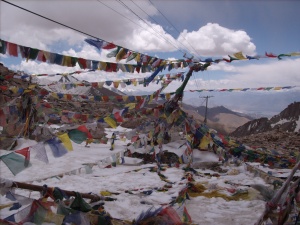 There was a military outpost on the pass, with soldiers milling around.  There were a number of other tourists as well.  We went up a little ways and came to a curious little temple – a one roomed shrine.  There was a small couch or bed of sorts which made me wonder about its occupant.  The shrine was in good order.  While this little temple was fascinating, what really took the cake for me was the prayer flags on the “summit” near the pass.  I got some good photos of members of our group, of the smoke offering being made and of the surrounding mountains as well.  They said that, on a perfectly clear day, which was not this one, people could see all the way to the north and gaze upon K-2 – the second highest mountain in the world.  As it was, they pointed out several mountains which were near K-2 (I guess its brothers and sisters).

We stopped for lunch near the side of the road, in a village that had an army base in it.  There were wild dree (sp?), the 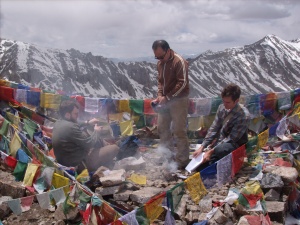 hybrid breed of yak and cows, running around.  They were incredibly dexterous and agile – considering they may have weighed in excess of 300 lbs!  It was fun to observe a new species – a really hairy, agile cow.  At first, some of us thought they were yak but we were quickly corrected.

Once we got to Nubra, there was a separate truck that had our supplies and workers (cooks and camp setter-uppers) – they had gone on, just ahead of us.  We put our stuff in our tents, were supplied with sleeping bags and pads and some of us, like yours truly, were so exhausted from the long, precipitous ride that we took a nap.

Up above you can see the glacier which provides the water for Leh and its valley.  They said that each year it is slow shrinking, which is going to be a problem one day.  The Ladakhis are some of the best in the world at channeling water – their systems of irrigation were just mind boggling.  But without any water to transport…  Yes, a problem indeed. 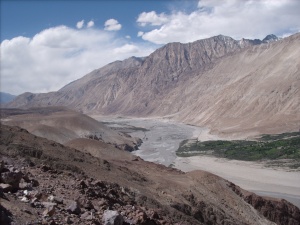 Thank you for reading!

One thought on “Pilgrimage to Ladakh – Kardung la Pass”