I just wrote the first post in this series yesterday and in it I described the way in which I drove out of a small but cosmopolitan city into the country, and then I drove back in time to visit my friend Simon, the old-timer farmer.

I asked him about the barns behind his house, and he proceeded to tell me that the land had previously been owned by a gentleman in the early 1900’s who fancied himself as a plantation owner.  He owned the entire 559 acres and he had several families renting from him who were tenant farmers.  This plantation owner had over a hundred head of cattle (hence all the cattle grates on the driveway), pigs and chickens.  Apparently some of the barns had collapsed or disintegrated, but they had been used for bacon or making sausage or storing hay, etc.

He mentioned how this “plantation owner” had gone bankrupt in the 1920’s and how his father and uncle had bought him out.  Then somewhere in the 1950’s, Simon had inherited his father’s half and then bought out his uncle’s half of the land.

He seemed anxious to get going (or maybe he was anxious to stop talking about himself or his family), so we headed down to the garden.  Keep in mind we are in the thick of summer here, so heading down to the garden is not an easy stroll through well manicured lawns, rather we drove through relatively smushed grass and parked under some saplings.  Getting out of my car, I had to walk through some tall grass to get over to the vine-covered fence which delineated the garden.  And of course that meant I had to pick off another tick!

Simon is almost 80 years old.  So the amount of work he gets done in a day is amazing!  Even if he claims to be slowing down now, I still think he could accomplish more in a day than I could.  Wow!

We stopped near the fence where some sod was bare and obviously some plants had been moved or pulled up and disposed of.  Simon had one of his buckets with him, and he showed me what was in it – compost type veggie and fruit scraps in a broth of reddish colored water.  He proceeded to pluck up some grass and produce a makeshift strainer from the grass.  He poured the compost water over a couple of raspberry plants – it was obvious he loved his raspberries very much!

Then we walked toward the main part of the garden.  We stopped and he showed me where he had pulled up the raspberry sprouts from – apparently when raspberry plants lean over, where they hit the ground, they put down roots and a new root stock is created (allowing these plants to spread rapidly).  So Simon just dug up the new root and put them where he wanted them and then he clipped back the main part of the plant.  In his compost bucket are the tops of tomatoes, green ends from veggies and apple cores, etc.  He also mentions how he saves his grey water and uses that to water half of the garden.  He has a large garden – probably 100 feet by 30 feet, so I understand how there would not be enough grey water from one person to water the whole thing!  And not to mention the work required to haul the water down there!

He tells me how he misses the groundhog which used to devour some of his crop.  Apparently he loves to share some of his garden, especially with the small “varmints.”  Now deer are another story – he has lease hunters come onto his land once a year and take all the deer they can get.  But I learn more and more how complex a character this ancient Virginian is.  He loves snakes, some varmints, raspberries and yet he is a gun-collecting, bible-thumping, conservative country man as well.  Oh, and he might be the most generous person I know.

Simon tells me how he thinks the coyotes got his groundhog friend.  Apparently he knew where the burrow was for this little friend and Simon no longer sees any tracks or rodent sized trails around it   😦    I did not realize coyotes were so common in Virginia, but once you leave the city, I guess they are there.  He mentions hearing the coyote pups yipping and the adult baying some nights.

And then he explains how to go about picking the bush beans.  “Do not step on anything green.”  He explains.  I know more than he thinks I know about weeds and gardens, but I agree and pretend to be the humble pupil in this situation.  I look around at his garden and I see enormous okra plants, climbing tomatoes which are tall and verdant.  Plus he points out a rare variety of melon called a Vine Peach or a Mango Melon.  I had never heard of such a thing.  He explains how he has never gotten a fruit from this plant as the frost hits in the fall before the fruit becomes ripe.  But he is trying yet another year – and I’m assuming he is watering this melon well from his baths or his compost water.

We go about picking the bush beans – which are basically green beans – although some are more like peas in that their pods are more flat.  Apparently these plants can produce one or the other of these types of bean.

It takes about 20 minutes or more to get through the first section of beans.  And then he moves on to picking cress salad.  This is a large leafed version of watercress (as far as I can tell).  It also had the rich, astringent flavor similar to watercress.  He told me to soak these leaves in water for about 20 minutes and then to steam them or put them in a soup.  Adding bacon or a beaf bone would help too!  Yum!

I will mention more of his stories in the next post.  Thanks for reading! 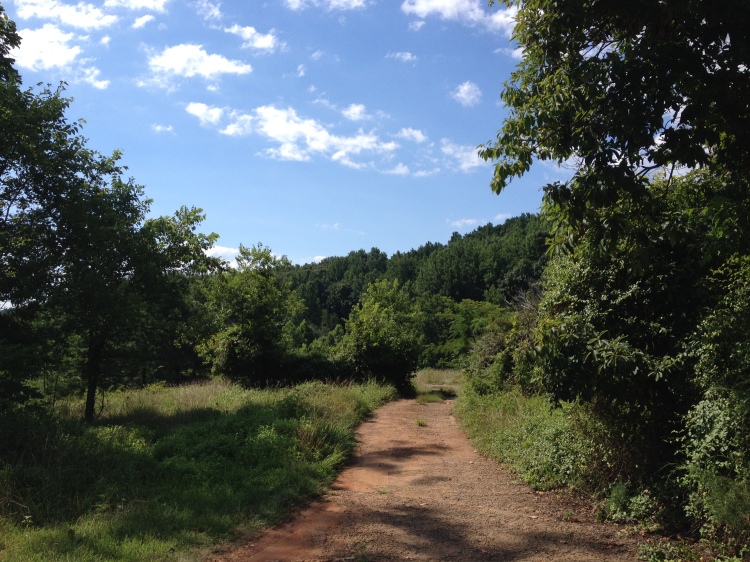