Who’d’ve thunk it? Going on a Buddhist pilgrimage in North Carolina… Well that’s right! One does not instantly think of Buddhism when N.C. is mentioned. But I am here to attend teachings by Khenpo Choephel at Urban Dharma in Asheville NC. And to rest down in the midst of everything!

Picking up Khenpo from the Charlotte Airport, I drive with him to Black Mountain just outside of A’ville. In the car, Khenpo tells me stories of Drikung Khandros (women dakinis or extraordinary Buddhist practitioners) in Tibet who helped with the rebuilding of nunneries which had been destroyed by the Chinese Cultural Revolution. We chat a little about the Vajrayogini Mandala which is supposedly surrounding the Drikung Thil monastery in Tibet (China). Khenpo is presently the resident teacher of the Pittsburgh Ratnashri Sangha, so I ask him about that center and city. Khenpo reminds me that it is good to slow down as he requests we stop for coffee and a relaxing pit stop at a Dunkin Donuts. I’m not sure the North Carolinians knew what to do with a Buddhist monk – one guy kept asking him why he wasn’t wearing sandals? But everyone was very nice to our teacher.

On Saturday we received Phowa teachings from Khenpo at the Urban Dharma Center. See my next post for more about Urban Dharma. We had a crowd of about 25 as this teaching was pretty much invitation only, but it was still a great day. We had a pot luck dinner on Saturday night. Then Khenpo made tormas (ritual offering cakes) for Sunday’s activities. While he was making tormas, I got a car-tour of downtown Asheville as I would be driving Khenpo the following morning – early – and they did not want us getting lost. 🙂 At least not more lost than I already was. 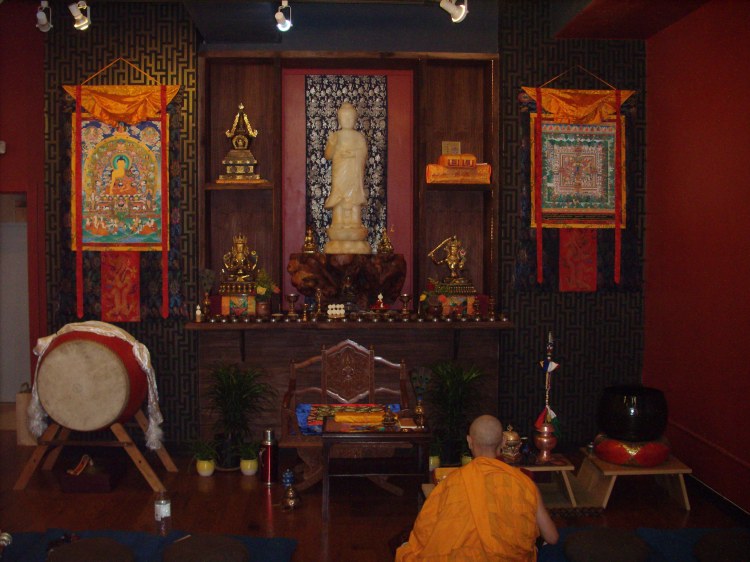 I was Khenpo’s unqualified attendant of sorts. I settled into this role with ease however as it was my intention to come down to NC to rest – I already volunteer with two other centers, so I did not want to start the trend of burning myself out at a third one! On Saturday, all that meant was making sure Khenpo’s hot water was always full and hot, and then making certain everyone knew that he was a vegetarian for the dinner. On Sunday though, it was fun to attend the Khenpo as he did a self-empowerment.

Sunday was an empowerment of Amitayus – the Buddha of longevity. When Lamas give empowerments, they must first generate the deity in themselves in a pre-ritual. Therefore we got to UD early on Sunday and finished the preparations – with a long life empowerment there are actually quite a few miscellaneous things required: long life pills (small dough balls which are colored red), long life vase, a long life banner (an arrow wrapped in colorful ribbons) and more. There is symbolism to all these ritual items but it would be best to let an expert speak about it! I was happy though to sit near Khenpo as he went through the preparations. See the picture below for a close up of the Long Life Pills and the Long Life Vase.

Then empowerment (blessing ceremony of sorts) went well. This was the official public opening of Urban Dharma and apparently many people found out about the teachings. And who would not want a long life empowerment, seriously? You mean I can just sit there, do some visualizations, receive a long life pill and then I receive blessings that can possibly extinguish obstacles to a long life? Count me in! Actually it is a bit more complicated than that – all empowerments have what are called samayas – or commitments – which we agree to abide by with receiving the empowerment and sure enough, there were some samayas with this one as well. Samayas are secret though – ask a qualified Lama about them if you are truly interested.

After the empowerment we went out to eat lunch and then I hopped on the (wrong) road to head back home. More on that in the next post.