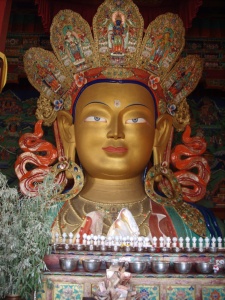 Okay – wow!  I have done a lot of describing 2008 Drikung pilgrimage to Ladakh (our group was from the TMC in Maryland).  In this post, I will describe my itinerary back from India, discuss the highlights from the Pilgrimage to Ladakh and go through (attempting brevity) the list of monasteries we saw in Ladakh.  Please bear with the lengthy post – it is worth the read – maybe two sittings would be good?

I am so very thankful to have a father who flies a lot for his job, and therefore can occasionally gift me a frequent-flier ticket somewhere in the world as a result.  On this occasion, I received “free” tickets to India and back, with just one catch.  Uh oh!!  The fly-ee (me) must be okay with the itinerary.  The trek home was definitely more colorful than the bounces to Delhi.  I did planes from Delhi to Frankfurt, to Toronto, to Montreal (yes, my final destination was intended to be Virginia but this was as close as United could get me) then train to NYC, switch trains to Washington DC to meet my sister, spend a night with family and then drive home to Charlottesville.

Actually it worked out very splendidly.  Had some pleasant conversations with people on the way to Toronto and then to Montreal.  It was very serendipitous – when I exchanged my India rupees for Canadian dollars (to spend the night in Montreal), I had the exact amount needed to stay in the hotel. This blew my mind – when one is practicing the Dharma diligently, very fortunate things can happen. Yay!  I think downtown Montreal has suffered quite a bit of urban decay (perhaps as the suburbs improve?).  Otherwise it was very enjoyable.

Oh and I was amazed that the thangkas made it back with me (sort of).  They were delivered the next day to my hotel and I had to be very persistent as the front desk clerk was “entirely certain!” that there was no such package.  I said, look again – but this time look for an unusually-shaped, plastic-wrapped, long-dowels-protruding package.  And he came back with it in time for me to make my train!  Good good.

Then the rest of the trip was uneventful.  Now, on to the highlights from the Pilgrimage!  These are not in any particular order.  Because you can go back and view the previous posts, I will just say a little about each of these here:

1) meeting His Holiness the Drikung Kyabgon at Phyang Monastery – major highlight, only it took time for it to dawn on me how fortunate we were to have tea and cookies with His Holiness – just he and our group.  Wow!  A Buddha and a King all bundled up into a spontaneously aware, present, skillful and awakened-wise being.

2) attending the Cham dances (Tibetan Buddhist ceremonial monastic dances which occur once a year at major monasteries) at Lama Yuru Gompa.  I am glad we spent several days at Lama Yuru – it has an incredible history involving Naropa and other great past masters.  And more recently, it has served as a retreat center as the Drikung Kagyu lineage was re-building in exile.  His Holiness the Chetsang Rinpoche, Khenchen Konchog Gyaltsen, Drupon Samten and many more did retreats under excellent masters like Kyunga Rinpoche – and one who we attended, Lama (Drupon) Jorphel.  Met Togden Rinpoche (a Mahasiddha) and Bakula Rangdrol Nyima Rinpoche (a Lama Yuru Tulku) – great teachers and practitioners.

3) being present for an authentic Ladakhi Oracle as she went into trance (with her apprentice), answered questions and did healings on locals.  Whoa – very intense, potent, unexpected.  A pleasant surprise which came of being with the right guide at the right time (Namgyal of Yama Treks).

4) a glimpse behind the scene looks into Ladakhi lifestyles – we were shown into the private quarters of several guest houses, including Bakula Rangdrol Nyima Rinpoche’s house in Leh.  Sampling authentic Ladakhi food was unusual and an added surprise.

5) crashing a huge Ladakhi wedding!  Awesome – the hosts’ generosity when they did not know us (the only Westerners present amid hundreds of Ladakhis) was truly incredible and touching.

6) touring His Holiness the Dalai Lama’s Ladakhi Palace.  This was a nice bonus to be in Ladakh for the celebration of H. H. the Dalai Lama’s birthday.  And then to spend it with Tibetans was special.

8) receiving teachings on Tibetan medicine from a Ladakhi (Tibetan) Amchi (doctor).  Then receiving very affordable private sessions with her as she dispensed advice and Tibetan medicine.  I found this very educational in addition to being helpful.

9) nearly losing my breakfast every time I looked out the car windows as we traveled several hours each way along precarious, enormous-drop-offs-cliffs en route to the Nubra Valley.  But you know, I must say that I fully believe this: “the more difficulty you go through to get to your pilgrimage destination, the greater the reward.”  Now don’t go and do anything foolish of course – we had professional drivers who played mantra CDs all day for protection (we needed them!).  🙂  The route to the restricted Nubra Valley includes the Kardung-la Pass – the highest motor-able “road” in the world.  Oh and we rode camels in the Nubra Valley – two humps.

A list of monasteries we visited.  Each monastery though really has its own special twist and novelty.  Nearly every monastery we visited had incredible murals, protector shrines and a shrine to Guru Rinpoche and more:

Lama Yuru – large, beautiful, exotic, remote monastery in Western Ladakh.  Incredible myths and history – if you can attend the Cham dances and stay in the large, on-grounds guest house, then you are very fortunate.  Camping was not bad either.  If you are a Drikungpa, this is a big pilgrimage site (outside of Drikung Thil, Tibet and Dehra Dun, India).

Hemis Gompa (Drukpa) – a secret (hidden in the mountains), large, very wealthy monastery that even has its own museum.  I heard from many people that they have a massive celebration for their Cham dances.  This monastery probably has the largest Guru Rinpoche shrine (and statue) I have ever attended.  This monastery was protected from several ransacking attacks as it is well-hidden in the mountains – most monasteries are visible from long distances as they are on top of hills / mountains.  Hemis however is well placed deep in a twisting valley – having a hermitage higher up on the mountain.

Tikse Gompa is definitely high on my list because they have one of the largest Buddhist statues of Maitreya in the world.  When you see an enormous, friendly picture of a colorful crowned Buddha statue – it is likely to be this one (see photo above).  I have seen it all over.  When you visit Tikse, you can also visit Stakna (Tiger’s nose) Monastery in the same day – well worth it as Stakna is on a large rise which looks out on 360-degree, vast, snow-mountainous views.

I am putting Chemray Monastery next, as we drove by it on our way to Tak Thog Gompa (the exclusive Ladakh Nyingma monastery) and Chemray looks like it could be its own little Buddhist City.  Seriously – its large hill is just covered with monastery buildings.  Along with Hemis, Chemray seemed like a very wealthy monastery – many large, beautifully painted shrine rooms and meditation halls.  A Guru Rinpoche shrine that is well worth the visit.  Tak Thog can be seen in the same day – then you will have a day full of Padmasambhava statues and shrines and potency!

Phyang – one of the monasteries that is close to Leh (Spituk is closer) and worth a little half day trip.  We attended His Holiness the Drikung Kyabgon here.  A beautiful Drikung Kagyu monastery.

On the way to Lama Yuru, we visited the village and monastery of Temisgam.  This was very unusual in that the monastery was no longer active – only one monk was “stationed” there year-round to maintain it and accept visitors / tourists.  It was still incredibly beautiful and well worth a visit.  Walk around on the ancient iron catwalks while you are there which will allow you to see the many prayer wheels which the wind is turning.  There is also a Nunnery at Temisgam – a very interesting visit.

We visited two monasteries in the Nubra Valley – Deskit (Diskit) Gompa and Samstanling (Gompa) Monastery.  Deskit had the most history of the two, and it has a VERY fascinating story associated with its Protector Shrine – as in don’t make any promises or vows you can’t keep kind of story.  Samstanling (Samten) Monastery was very nice as well – it had an enormous amount of intricate carved wood used in its shrines and all over – doorways, balconies, railings, etc.  Also, we had the great fortune to meet Bakula Rinpoche’s young present incarnation here in Sumur.  Deskit has a beautiful, huge outdoor seated Buddha, I think Maitreya, which was under construction while we were there.  It should be finished by now and would be gorgeous – looking out over the Nubra River Valley.

The Likir and Alchi monasteries can be seen on the same day.  I was sick unfortunately so I only saw a part of Likir and then missed the Alchi portion.  Likir has a huge outdoor Buddha statue – very shiny gold and precious!  Alchi has some of the oldest Buddhist artwork in the world and therefore I heard it was a little dark (to preserve the ancient murals).  You may want to bring your own  flashlight – not too bright though.  However its murals are very unique in that they have a distinct Kashmiri influence (Muslim artists painting a Buddhist monastery?)  🙂  Great!

Shey Palace was practically a monastery with an enormous Buddha Shakyamuni Statue and shrine.  It is a nice visit with delicious restaurant food down below in the village.  The second palace we visited was Basgo – also not active – it housed a huge seated Maitreya statue (I think Maitreya).  When you go there, the affect of the weathering is vivid and direct – you cannot miss how fast the rest of the non-maintained sections are melting and crumbling away.

His Holiness’ (the Dalai Lama) palace in Leh is also rather monastic, for obvious reasons!  Plus there is the large, one-roomed temple next door.  If you are a practitioner and in Ladakh – try to get here.  Well worth the trip.

The Head Oracle or Shaman of Ladakh is actually a monk or lama.  He is a Sakyapa and he resides at the only Sakya Gompa in Ladakh – the Matho Monastery.  I was sick for this day as well, but everyone seemed to enjoy it.  I heard that women are not allowed in one shrine room (maybe having to do with divination).  Not sure if it is just women on their cycle not being allowed in… (what?!) But I wished I could have seen it nonetheless!

Finally, Spituk monastery, last but not least, was the last monastery I saw before leaving.  It is famous for being both a Hindu and Buddhist Monastery – as its Protector Shrine (Gonkhang) has a significant Shiva Statue / presence.  A curious, slightly urban monastery as it is just a few miles from Leh.

4 thoughts on “Pilgrimage to Ladakh – highlights and Ladakhi monasteries summary”