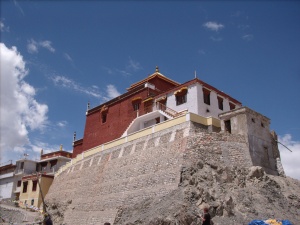 Well I figure it is better late than never, as I am still continuing my Ladakh chronicles from 2008.  After Lama Yuru Monastery, we drove several hours back to Temisgam.  Under the great monastery on the hill is a beautiful nunnery.  They have 46 nuns all totaled, however many of them were gone to Leh to receive teachings from a high lama.  Therefore only the oldest and youngest nuns stayed behind.  There was a beautiful shrine with various deities including Green Tara, Vajrayogini plus Shakyamuni Buddha with his two attendants.

We sat and drank tea a bit.  Then they did a little aspiration prayers.  The nunnery consisted of a two story residence area, which we walked through briefly to see their class rooms.  They have two rooms for the younger nuns, which are separate from the shrine hall.  When the nuns chanted, one person would start out the prayer and then they would all follow suit emphatically.  In my journal I explicitly recall the potency of their voices, despite there only being 15 – 20 of them there.  We gave them offerings and then played a little out in the courtyard.

A few of the youngest nuns, so cute, did “Old McDonald” (had a farm) for us and then they eventually got shy and ran away.  We sang happy birthday to Bily (and they young nuns came back).  He got out his banjo and played a tune for them, which several people danced a quick jig to.  I found it extremely heart warming and endearing.  Bily said later that he had played a murder ballad… but he, we had fun and no one could tell. 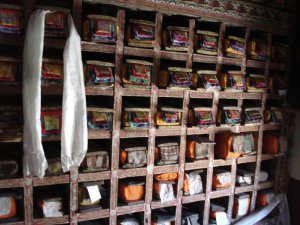 Oh.  I just read a section of my journal which I had set aside (and thankfully forgotten).  If you have been keeping up, you will recall, and if not, I will repeat this again.  I had contemplated doing a retreat at Lama Yuru due to my staying on in Ladakh for an extra week.  However, several conditions seemed to obstruct this plan of action, so I went back with the group.  That night, at the guest house in Temisgam, the trip organizer gave a brief Dharma talk.  He teaches a little on the basics of Buddhist philosophy, and of course, being a professor, it seems like he enjoys it.  Anyway, on this particular evening, his words went straight to my heart.  It was almost as if I missed an opportunity or maybe I was just being hard on myself.  Here’s what I wrote:

“[He] was very compassionate, his Dharma talk about the basics was phenomenal.  ‘If we do not see the building as burning, how can we practice Bodhicitta and desire to get everyone out of it?’  The desire to benefit others and to help them be free of suffering must be coupled with right view, right meditation and right conduct.  Contemplate the Four Seals and why the Buddha taught about suffering and its cessation.  If I hear about the suffering of the six realms, karma – cause and effect, and I am not afraid, then either one or two things is going on: 1) I am a Buddha, or more likely, 2) I am more stupid than a cow.  Practice calm abiding to get a glimpse at my own mind and its workings rather than merely relying on others or books.”

It felt like, despite six or eight of us attending the Dharma talk, that he was speaking directly to me.  It was not a reprimand per se, but more of a, “if you are going to stay in samsara, rather than go into a brief retreat, then I am going to bring a heated, direct sermon!”  Wow.

I did not seem to take any (decent) photos of the nunnery, so these pictures may have been in a previous post.  Thank you to Joe Nabholz for the picture of the texts.