This is a brief addition to the previous post – about the surprising event which occurred Friday evening. 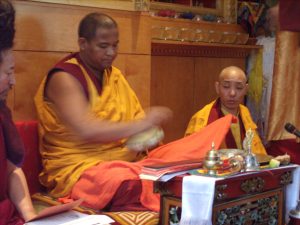 1/1/10 – continued – The Mani Drupchen was originally scheduled to have the empowerment on the first Sunday morning, with Gyabra Tritsab Rinpoche and then it was going to culminate on the following Sunday with dedication, dissolution of the mandala, distribution of the mani pills (Tibetan medicine pills) and the naga puja at the river where they pour the sand mandala into the waters.  However, due to Rinpoche’s visa issues and not being able to come to the United States at this time, the empowerment was pushed back to the end of the retreat.

Then, as we were practicing on Friday evening, there was a bit of chaos as one of the drain pipes in the basement backed up.  It took some discernment but it was quickly determined that no more water or waste could be drained.  So there were about 20 people at the center with the intention of spending the night when we were told that we could only use limited (slight trickle) water at the sinks and no toilets.  There was a variety of reactions – some people were obviously disturbed by this information, while several people slept through all the commotion.

It was decided to make Saturday the last day, as we only had a single port-a-potty for forty to fifty people (there were many people there to attend the empowerment).  Therefore, the empowerment, the mandala dissolution and the naga puja happened on the same day.  I will save that beautiful description for my next post however, as I want to mention some fascinatingly comical facts. 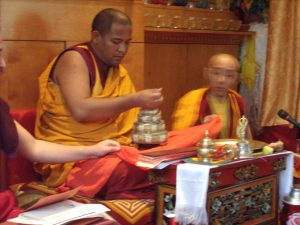 I do not know what kind of karma I have, but recently I have been experiencing some rather bizarre situations involving plumbing.  For instance, in my basement apartment, over the past few months, I have had to deal with two separate pipe-backing-up events or some minor flooding as it were.  Therefore, I had some experience with plumbing problems before the little incident occurred at the center.

What was strange however, was that the only person’s belongings who got really soaked, was me.  I had my personal food and my overnight bag next to the washing machine, and that is where the outlet for the backed-up water was.  It was kind of funny.  There is this plumbing problem, with a little bit of water spilling over – it was surreal actually.  I think my being on retreat made it much easier to take, but I am really pondering what metaphor the universe is trying to get me to observe – or if I just have some strange waste-water karma at the moment (transiting Uranus is crossing my watery Pisces natal Sun as we speak).

[Revised 4/26/21: I’m not sure why I thought it was funny (although on the retreat itself it could easily have been the sleep deprivation – but I wrote this after the Drupchen was over…), rather having piss water soak ones few possessions is rather disgusting. Period. In retrospect, it may have been the Nagas trying to communicate something to me – it turns out things did not work out with that ex-girlfriend.]

One thought on “2nd Annual Mani Drupchen – Day Seven plus”