These are images of tormas from the Vajrakilaya mandala and shrine, from a retreat in Batavia New York.  Sponsored by the White Lotus Dharma Center of Rochester New York. 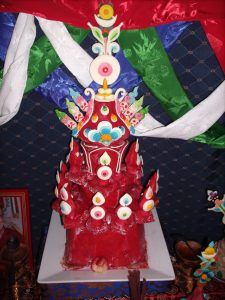 Some of the tormas were more “typical” of tormas I have seen at other retreats and monasteries.  However, on the Vajrakilaya mandala, there were two tormas which I should have asked about.  I will put both of these pictures next: 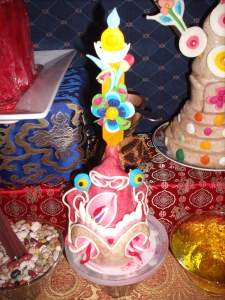 This torma at right seems to have the base of a distorted face – eyes askew, large teeth, and tongue flopping up.  If you know what this symbolism represents, can you leave a comment please?

Then, there was a torma which is pictured below: 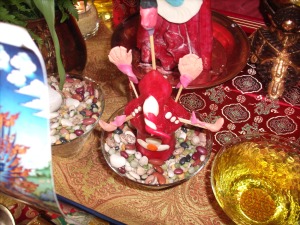 This torma seemed to have little hands and feet on it!

I would bet that at least one of these tormas, in a different country, in a monastery would have actual animal parts incorporated in it.  I refer the reader back to my posts on a Pilgrimage to Ladakh India.  At a monastery there, I saw dried intestines at the base of a large torma (I believe those tormas were for a Mahakala puja).  Garchen Rinpoche mentioned that this mandala was not complete (due to having only one monk helping with the preparation of it), but he did say that it was definitely sufficient to invite the wisdom beings to reside in it. 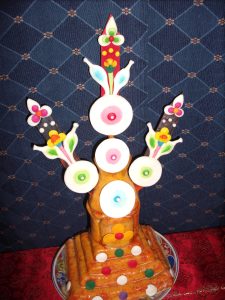 Garchen Rinpoche mentioned that there were four tormas on this particular mandala which had to do with the four directions and the four types of Buddha’s activities:

Four activities (Wyl. las bzhi) — the four activities of pacifying, enriching, magnetizing, and subjugating, which are practiced as part of the deity yoga of the inner or higher tantras. Practitioners visualize themselves in the form of the deity and train in:

often through the emanation of rays of light. Once accomplishment has been reached, these four activities are carried out directly as aspects of enlightened activity for the benefit of others.” 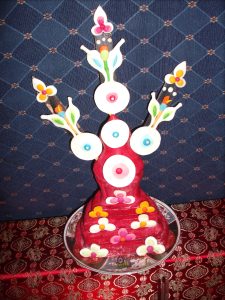 I forget which colors went with which activities, and if you look it up on wikipedia, it seems to be a little off.  I do know that Yellow is associated with Ratnasambhava Buddha (south), Red with Amitabha Buddha (west), Green with Amogasiddhi Buddha (north) and White with Vairocana Buddha (east?).  I guess that would leave Blue to be in the center as Akshobya Buddha.  You can see that generally there was one of each of the four colored tormas in the four cardinal directions (you can’t see the directions, but you can see the colors).  So finally, here are two more pictures: 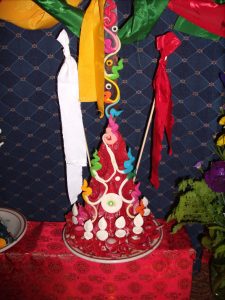 And the last (directional) torma: 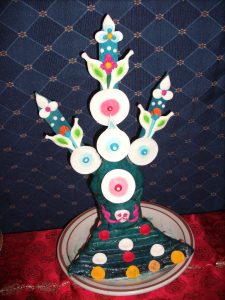 One thought on “Vajrakilaya Tormas”