This post is a fictional rendition of a night at the recent ManiDrupchen. Everything written on this blog, up to this point, is copyrighted by M. Kirby Moore. Please ask permission before using. Thank you and enjoy!

The pictures on this post are from the Lama Chopa Tsok feast on Sunday. The Lama Chopa Tsok is an offering to the wisdom beings and lineage lamas and it is offered after major retreats / religious events as a way of dedicating the merit gained during the practice. It is said that if Lama Chopa and Tsok are offered with sincerity, then the lineage lamas must attend, either in person or through the ether. This particular Tsok was particularly delicious and special (to me) because most of it was homemade and as a result, it had much less sugar than is typical (when dozens of people bring Tsok offerings on their own).

Remember… this is a fictional rendition. Short disclaimer: A spiritual aspirant should always seek a qualified teacher from a reliable and respected tradition before engaging in meditation or spiritual practice of any sort. Relying on books does not confer a titch living blessing whatsoever. With that said, please enjoy…

“Oh my god! How long is this going to last?” Mical thought to himself. The words of the blessing ceremony were starting to blur together. He was very happy to be there, but on this particular day, he had a bit of a headache and he was pretty sure the homeopathic medicine he was taking was causing his pineal gland to shift in a most peculiar manner. Plus it felt like he had walked through a foggy cloud-bank and had yet to emerge. 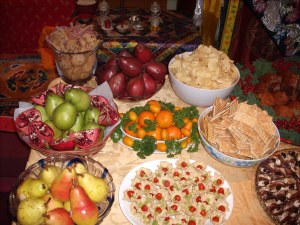 The translator continued: “this picture is symbolic of the inseparability of wisdom and compassion…” Mical was groaning within. He was struggling to stay present and focus on each picture. He wanted to ingest the blessing which was spoken so highly of, regarding this particular empowerment. Apparently this was a special royal lineage empowerment from one of the Great Tibetan Kings. He had heard inspiring stories of times past, when enlightened deities incarnated among humankind, became leaders and occasionally extremely rare and precious treasure texts would start raining from the sky. Maybe if he could focus just a little bit longer…

“Ugh! My head is aching like never before!” Again he thought to himself. No use moaning in the crowded shrine room and drawing attention to himself.

“Now visualize the retinue as such…” Mical caught a snippet of a missed conversation. “Oh no! Who is in the retinue? What do they look like? I missed it! Argh!” This day was not going as planned. Whoops! That sounded important.

“…this allows you to conquer possessiveness which comes about through the false view of duality…” Mical tried to focus and catch a solid image of that particular picture being displayed.

Again thinking to himself, “why do they keep saying the same thing but with different words…? Can we get on with it already?!” Patience was normally his strong suit, but this was a particularly trying day for some reason. This might have been the first time he had EVER regretted the teacher being so thorough… Yikes! 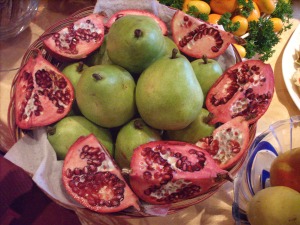 The Vajra Master, or Tibetan Lama in charge of the empowerment, said, “Now we will break for lunch. You have received one of 40 empowerments of this sacred initiation.”

In his mind, alarm bells started ringing, Mical wanted to jump right out of his skin and dive into a pool of perfectly warm, herb-filled milk, or go escape to a spa, or roll most uncomfortably down the mountain. And definitely go for a hike. “Anything but this! Why is it so hard for me to stay focused and awake today? Oh my God! And we still have 39 empowerments to go? What am I going to do?!…”

Lunch was delicious, having been brought to the meditation center by a generous Vietnamese family. And then Mical spent time joking around with one of the Tibetan monks – Lama Tenzin Gendun. They spoke about fixing cars, traveling and all the simple topics Mical could think of, considering how limited his Tibetan was…

The empowerment continued, along with Mical’s inability to be present and joyful in the moment. At least the lunch break provided a nice distraction. Back in the shrine room, the Vajra Master was holding up pictures which had profound symbolic meanings. “Just try to stay awake!” Mical inwardly scolded himself.

Thankfully the remaining 39 empowerments did not take nearly as long as the first one. The first one, along with the Vajra Master’s introductory teaching took the entire morning. The master was being very specific and giving detailed instructions – so much so that it was hard for questions to arise. Unfortunately Mical could barely get beyond the question of, “why can’t I go downstairs and take a nice, long nap?” He grinned to himself at that thought. Here he was, extremely fortunate to be able to attend a single moment of a precious empowerment, and in spite of this fact, his mind was unbelievably restless. Apparently just a drop of the Dharma essence might be able to liberate people with immaculate karma. Yeah, Mical was beginning to wonder about his curious karma. 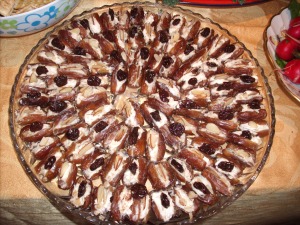 “Tea break.” Several people in the audience did not understand, but Mical knew those magical words. Meaning it was time to lie down, without missing any of this precious ceremony. “30 minutes…”

“Whoa! I can take a nice little nap… Sweet!” Mical bowed reverently when the Vajra Master went by. And then shortly, he followed him out, went downstairs and lay down on a couch. People were coming and going, but he did not care. He was able to shut his aching eyes and rest…

“Click” A light was turned off nearby. “Where am I? Oh, the meditation center basement. Who is turning out the light? Alexander. Okay good… wait… Oh no! Did I miss the end of the empowerment?! Oh no!” Mical scampered upstairs. He only slowed down upon entering the sacred shrine room.

“The 28th empowerment is as such…” The translator started. Mical looked in his notes.

“Wow! It seems I have not missed anything! We left off at 26 or 27 before the break. Maybe I was awakened at just the proper moment. Awesome!” Mical was very grateful to Alex.

For some unusual reason, Mical’s ability to focus and to sit calmly, both inwardly and outwardly, seemed to be different. “What is different here? I took a little nap… Maybe that I was all I needed?! I can think clearly and my head isn’t aching so badly! Who knew that 10 minutes could make that much of a difference?” He was able to peacefully watch the Vajra Master, or shift his focus to the translator – and not be irritated if it seemed like each picture’s inner meaning was remarkably similar to the previous 17’s.

During the final session of the empowerment, Mical marveled at the intricacy of the process (and the Buddhist masters who penned it all) – it seemed like everything was being covered. Everything that is from starting the process of purifying the seeds of rebirth in each of the six realms to union with each of the six Lords of the Buddha families. Whoa! That wisdom seemed quite beyond Mical in that moment.

At the end of the empowerment (or 40 mini empowerments), the Vajra Master said, “okay all finished.” It was precious to hear him speak in English. In general he has a translator for his teachings or empowerments, probably because the language can be technical and precise. Then, despite having given the empowerment, which lasted from 9 am to 5 pm with several breaks, he continued with the planned schedule of telling the audience about the benefits of and significance of the Om Mani Padme Hung mantra.

“Amazing!” Mical thought, regarding the Tibetan lamas, their persistence and endurance just blew him away. It seems that having to maintain a visualization all day as enlightened deity, in order to bestow the empowerment, would wear anyone else out. But not this particular teacher.

End of Part One, thanks for reading