This material is copyrighted by me (Kirby Moore).  Reproduction without permission is prohibited.  To support my business and blogging efforts, please visit Kirby’s website. More recently, I have begun teaching Astrology classes on Trauma-Informed Astrology, see http://www.traumainformedastrology.com for more! Thank you for visiting!

Had someone either informed me that I was about to spend seven days in a row, eating, sleeping and chanting in close proximity with fifty people, half of whom were complete strangers, and several of whom came down with serious colds, I might not have had this adventure (plus keep in mind what constant sniffling and sneezing might sound like when we have little sleep amongst a full shrine room – wow!). Or had I known that we would not be allowed, due to limited facilities, to take more than one shower every four days, and that the port-a-johns and the hand washing station next to them would freeze solid early on in the retreat, I would have said I was crazy to do it! As it was however, I attended the first Drikung Kagyu “Our Vast Noble Heart Mani Drubchen” retreat in North America. Actually, I did know what I was getting myself into ahead of time, but I felt a calling, a pull or more of a “you have to do this or else face bland monotony for the next six months!” to immerse myself in the vast waves of purification.

I left my beautiful, soon-to-bloom Christmas cactus with a friend, hopped on the road and picked up a Romanian, Tibetan Buddhist nun (ani) from Dulles airport. She was from California.  We had a pleasant conversation about her center, her experiences as an ordained person and a little about what I do. Like most ordained practitioners, she felt it would be advantageous for me to become ordained, but we did not have to agree on everything. Then we arrived at the TMC. The lamas had completed the sand mandala the day before, so it was in its golden curtain, in shimmering splendor. Seeing one for the first time, up close, was breathtaking. Somehow the colors were extraordinarily vivid and brilliant, the individual shapes and angles simple yet sharp and detailed. In what I assumed to be the typical Tibetan fashion, there were little ritual cakes called “tormas” around the mandala with water bowls and pictures of Buddhist deities on the sides and behind it. There were little pillars with faces or heads on their tops, facing outward in the four primary and four secondary directions. I figured they were guardians. What was most unusual was that the mandala itself had a gold curtain all the way around it, and later, once the retreat got rolling, the curtains were primarily closed for seven days, until the dissolution at the end. 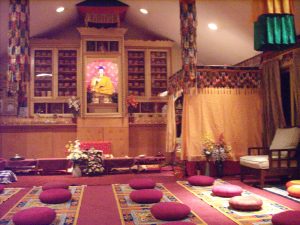 I explored the shrine room, which housed the mandala and many cushions and chairs for retreatants to sit, with the giddy anticipation of a naïve child, not knowing what to expect yet excited to be apart of whatever I had gotten myself into. If anything, I had loftier expectations than were appropriate. I may have thought that a week of sitting, spending 17 hours a day chanting the same magical mantra over and over would produce miraculous results. Huh? I had heard one story about a 45 day Drubchen where the precious medicine pills which are blessed throughout the retreat miraculously spilled over the sides of the large bowl containing them, as they multiplied out of thin air. What a bummer it was when this did not seem to occur. None-the-less, I entered the tiny house where 30 of us would sleep each night. I said hello to the resident lama, the Khenpo, or abbot of the Tibetan Meditation Center. There were several other familiar faces by that point and I chatted briefly with them. However, I had been resting down and taking it easy for the past several days, purposefully preparing for what was to come. Therefore I had a little soup and stayed fairly quiet.

[As an aside, the picture of me above is from my Grandfather’s b-day party.  I was horsing around and, in his customary fashion, my little brother snapped a photo.  He likes to take pictures of people’s eyes – zoomed in real close.  Very zapchen-like of him.]

Revised 3/18/2021: Just a note… when there are 50 people with good motivation to attain enlightenment for the benefit of sentient beings, and they push themselves pretty hard to chant and pray for 7-days straight, with one group always chanting around the clock (we took shifts), then those precious medicine pills become imbued with healing regenerative medicinal qualities. Just saying prayers for one person alone can make a difference. Imagine what a million mantras can do!

Thank you for visiting!